Per the State of CA and the County of Santa Barbara, Salt does not require face masks indoors for employees or vaccinated patrons. As COVID 19 virus still exists, we do allow visitors or employees to wear masks, as needed. Masks are optional. We strive to keep our...

A Girlfriends Guide To A Well-Seasoned Celebration

If you still think that smudging refers to makeup blending and Himalayan pink salt is just a flavour enhancer, think again. We’re suddenly living in an alternative universe where healing with crystals and other New Age modalities is commonplace and even the...

Nestled below the quaint steps of historic State Street, the Salt Cave in Santa Barbara are forged from 200 million-year-old Himalayan pink salt that seem to rise from the surrounding salt beds like some mythical village. Created from the crystalized sea salt beds of...

SALT BODY SCRUB
this product is amazing. it was sed on me when I had a treatment and I bought it. when I returned home it was as great as it was during the treatment. my skin has been amazingly soft. I even bought some for gifts!

LOVE, LOVE, LOVE!
I absolutely LOVE this body scrub! It is not too greasy, and the scent is addictive and very rejuvenating. I am hooked!

SALT TEA LIGHTS
Love my tea lights! I bought one in the store and loved it so much that I had to buy three more online as gifts. They are so beautiful when lit.

CUSTOMER SERVICE
I had a shipping issue with my order for the Almond Coconut scrub. My product came damaged. They promptly sent out new product no questions asked. Thank you! I love your products!

GIFT TO DAUGHTER AND DAUGHTERINLAW
I have not used but love the lavender room and body spray, that is why I gave these gifts.

ONE OF MY FAVES…
This balm works wonders and smells very pleasant. 🙂

GREAT PRODUCTS!
All of the products I’ve bought from Salt SB have been amazing, my personal favorite is the salt scrub (almond coconut) I’ve never felt my skin more moisturized. I’ve also recently completed one month of Sole and I absolutely love it, a great detoxing cleanse that also has helped me lose 5-7lbs.

EXFOLIATING AND EFFECTIVE!
The almond coconut scrub is really wonderful on the skin! It leaves your skin feeling soft and supple while exfoliating your dead skin with himalayan salt. Will buy again

This foot balm is the best!!!
I absolutely love everything about this product. It smells great and works wonderfully. I highly recommend it! 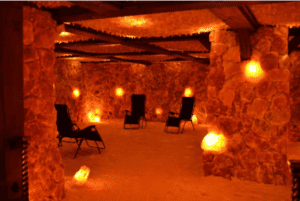 Santa Barbara resident Pam McCaskey is clear on one thing: salt changed her life. During a particularly hard time, McCaskey was introduced to her first salt cave while visiting her mother on the East Coast. After stepping in she felt a bond to the elements that surrounded her, reminding her of a deep connection to the earth and simultaneously melting her temporal burdens away. For McCaskey, salt aroused a natural spirituality that allowed her clarity, peace and ultimately, the ability to change her life for the better. Helping others to physically and mentally empower themselves became her mission, so she opened up North America’s largest Himalayan salt cave right here in Santa Barbara.

Follow a Spanish-style staircase down to a small store filled with all-things pink crystal, and you have arrived at the Salt Cave in Santa Barbara. Pam welcomed me in to her beautiful space, where rows and rows of products made locally from pink Himalayan sea salt line the walls and tables. From cooking blocks to shot glasses, massage bars to body scrubs, and salt lamps to candle holders, I learned that salt can be used for almost anything. When salt is consumed or 84 minerals and trace elements present in sea salt catalyze the body’s absorption of other vital elements, such as potassium, calcium and magnesium. Natural sea salt also promotes healthy internal functions, such as regulating water levels and preventing muscular cramps.

A large wooden door in one of the shop’s walls leads to an entirely different space – one that is even saltier. This is the Salt Cave. Pam treated me to a cave session where I could experience the benefits of breathing in salt-infused air. Himalayan salt has healing properties that help skin conditions, such as psoriasis and eczema, as well as respiratory problems like chronic asthma. I stepped into a large wooden room and noticed that I was completely surrounded by pink salt. From walls made of natural salt blocks and a ceiling covered in small stalactites to crunching over a sandbox-like floor of small salt crystals, I was completely immersed as I walked towards my designated lounge chair. I spent the next half-hour laying down on the floor and deeply breathing in a cleansing, subtle aroma that left me completely rejuvenated.

The salt that coats the walls and covers the floor is mined from ancient salt beds in the Khewra Salt Range of northern Pakistan, part of the Himalayan Mountain Range that was formerly a Paleolithic ocean. Over the years, the rock formations have exposed the dried ocean bed’s salt whose creation dates back over 200 million years. These rock beds are made of the purest salt on Earth, isolated from any modern pollutants and cleansed by millennia of underground tectonic activity. McCaskey built her cave entirely from scratch, shipping in tons of this salt from a supplier in Pakistan.

“I love what I do,” says McCaskey. “I have seen grown men cry when they step inside the cave. Everyone has a different experience, and I’m glad I can provide that.”